Back
People, Random Apr 06 2020
The Layers of Emma – Opening her heart to Bhutan

ou might imagine the home of a Buddhist Nun to be a threshold of tranquility inviting silence, inward reflection, and maybe the removal of shoes.

But not the home of Emma Slade, Britain’s only ordained Buddhist nun, and something of a super star.

Welcomed with a heart-gladdening combination of “my loves”, and general good cheer, we met just hours after she’d returned from Bhutan. Aside from an apology for the mess (there was no mess) there was little sign she had flown home from the other side of the world. Buddhist nuns evidently don’t suffer jet lag.

Bhutan, which plays such a significant part in her life, is something of a marker. A place her life changed for the better. Because it could so easily have taken a different course after one brutal day in Jakarta.

Held hostage in a luxury hotel, she found herself suddenly powerless, and stripped of the safety she took for granted.

She thought her life was about to end.

It’s a story detailed in her book Set Free, an account of her journey from businesswoman, to Buddhist Nun in Bhutan.

It’s at times painful reading, but it’s also a remarkable story of renewal. Not just her recovery, but how she came to tell her story, and set up the charity Opening Your Heart to Bhutan, funded by the proceeds of her book.

It’s that which now occupies her time, making her life something of a whirlwind.

Emma grew up in Whitstable before moving to London, then Hong Kong, before finding her way back to the Kent coast. It’s home again. But in some ways so is Bhutan; the tiny land-locked country in the Himalayas.

The book is Emma’s own story, but one packed full of inspiration for others.

No short cuts to success or spiritual happiness, but eye opening for those seeking a nudge towards contentment that’s increasingly absent in western life. Serving others forms the core of her own life, but it’s not out of reach to anyone else.

I was writing the book to say look, many of these situations I faced are very human. We have these in common. It’s not like these are specific to me, or specific to the fact that I became a Buddhist nun.

For Emma that means dedicating her life to serving others. But it’s not as easy as simply waking up one day and deciding to change.

When you begin to develop the mindset to serve others you realise just how many things need help. You see this huge landscape of need.

It’s something many people eager to help find to be a problem. Where to even start ?

“ You have to work out: What’s my focus ? Because you obviously can’t help everyone. Which is devastating. . .]

And the nice thing about that is that, once you’ve focused on your area, you can make a difference.

But you do need to focus. Otherwise I think you just feel quite scattered.

And there are other less obvious obstacles.

You have to be quite strong, because you’re dealing with other people’s suffering. And sometimes that can make you wobble.

None of which sounds easy. But perhaps the point Emma makes is more that the effort itself is the final destination. The error we often make is mistaking happiness for our possessions, or money, or a lifestyle. Cases of depression and anxiety meanwhile increase.

From a Buddhist point of view maybe from a human point of view, true happiness comes from feeling meaningful in your world and that usually will involve a larger purpose.

Buddhists call the absence of this Dukka.

It doesn’t really mean unhappiness. It just means kind of not quite feeling content. After a while most humans realise that it relates to them.

As Emma points out, regardless of whether people have money or security. People soon start asking such questions.

From a Buddhist point of view this is a point of beginning.

You really begin to see that your own happiness is to do with cultivating a state of mind.

And then of course you realise “who’s in charge of my state of mind ?” “Oh, that’s me”.

That should give a feeling that this is great it’s in my hands. Your feeling of being meaningful and happy actually comes really from being in connection with others.

At this point Emma smiles.

While it’s easy to find this overwhelming, Emma has a more optimistic take.

Mental health has become a huge issue. We’ve got to a point where our normal origins of happiness really aren’t working anymore. And they tipped over now into actually having a negative impact on us.

“ I think the next wave of development the West will be far more about the inner landscape. . .]

I’m not talking about really serious mental health conditions. I’m talking about anxiety, depression, and a sense of loss of purpose. Why am I here ? What am I doing ?

All of which is a long way from Bhutan. Her stories from there — documented both locally and nationally — are properly humbling.

But also not without humour.

The problems of the west don’t exactly translate well.

I can remember my Lama not really understanding a lot of this stuff. He genuinely thought that everybody in the West was just happy, because they didn’t have to struggle for anything.

It took him a while to really know. And even for him it was quite a shock.

So what can people looking to change actually do ? How can they create a more meaningful existence, more compassionate, and less dependent on the trappings of wealth and possessions ?

People don’t like to change their habits. But if we’re going to progress from here we have to question these habits.

Which counts as one of the themes of the book. When reading about Emma’s life, you can’t help but ask questions of your own.

Not whether you should give up your western lifestyle to seek spiritual growth in the Himalayas. But those parts of your life you want to improve.

Emma’s story serves as an example.

That terrifying day in Jakarta could easily have brought life to a halt.

Fearing for her life, and ultimately rescued in a grisly police stand off, she instead rebuilt her life, turned her back on those things she previously thought indispensable, and set about finding her own happiness.

It came through effort, and a cause like Opening Your Heart to Bhutan, which has now helped establish Bhutan’s first special needs school.

It’s that, not Jakarta, that has become the defining story of her life.

Jakarta did leave me with this feeling that I just don’t want to waste my time, because at any moment this could go. I think that has given me this kind of mental resilience.

But what does she hope other people take from it ?

I want them to be able to see the wisdom and the insight that can come out difficulty.

Because you can find insight and wisdom out of easy situations, but they don’t challenge us to really think about things in a way that difficult situations can.

There’s something more fundamental too – compassion for those taking that first step in their own recovery, in whatever form that might be.

I wanted to give hope I suppose. That you can go through something pretty hideous both the event and post-traumatic stress disorder, and fully heal from it.

I think also to trust your own instincts.

“ I have many moments along the journey at which there was just a sort of a flash of insight, a gut feeling whatever you want to call it and I followed it. . .]

In Emma’s case that was returning to Bhutan in search of the Lama who would become her teacher. A voice in her head compelled her to go find him. She decided to trust it.

Emma is never far off returning to Bhutan, but for now she’ll press on with the phone calls, and the emails, and the bureaucracy that hampers any major project in Bhutan – all done from her terraced house in Whitstable.

She has plans for another book, eventually, along with more teaching and speaking – both locally and around the world. She’s also learning Tibetan.

It felt more like a lesson than an interview.

Would her life have been different had that day in Jakarta not happened ? Undoubtedly yes, she says.

But in a way it is obvious that was a pivotal moment in my life. And because in the end so much good has come out of it I can’t help but be kind of grateful.

It’s taken a long time to get that perspective. Even if you’d asked me ten years ago I don’t know that I could completely said that now.

I think it’s now that I’m in the right path for me; I really have found my thing. 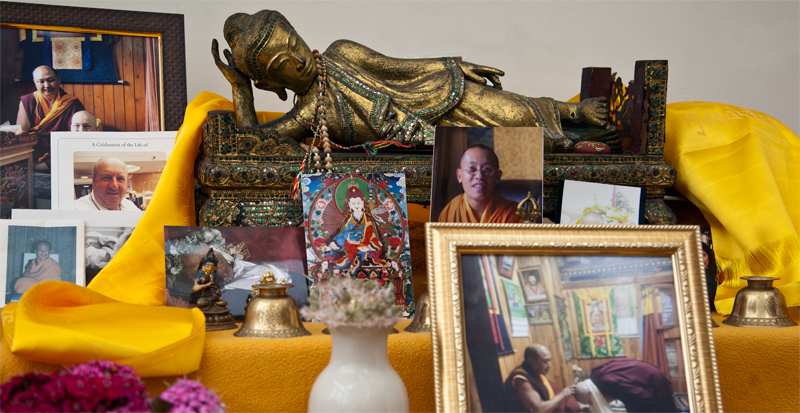