n case you were wondering, it’s a 1972 West German Volkswagen fire engine, from the village of Meerdorf. It was bought 18 years ago for more than it was worth, but less than its smitten owner was willing to pay. It’s rusty, creaks a bit, and its best days are long behind it. But it still goes.

You could say the same things about its owner.

Allen Reed is bald, mid-fifties, with a long grey beard that he strokes habitually. Like his fire engine, his house is rough around the edges. But there’s a warm stove, memories pinned to the kitchen wall, a guitar in the corner, and a pot of tea on the go.

He can also tell a good story, like the one about his fire engine.

“ I like the shape of those vans. And the way the beacon on the front is put on painfully forward, the way they’ve got the ugly chops. I think they’re stupid and charming. There’s beauty in their lovely ugliness. . .]

Allen, a restoration engineer by profession first came across the fire engine when he lived in the West Country. Outbid the first time, he got a second chance to buy it a year later.

I didn’t even ask how much. I didn’t care. I wanted it. I would have walked a dead straight line through brick walls to buy it.

The plan was to use it as a daily run-around, and a way to promote his work. But things weren’t quite what they seemed, starting with the spec from the vendor.

He knew that the whole bottom part of the van was about to drop off. I didn’t.

But even with the enormous repair bill, and endless welding, Allen still had what he wanted.

We’ve camped in it. I used to live in it. I’d travel around south England, sleep in it, work, move on, sleep.

When put logically, it’s easy to see the appeal.

It’s shorter than the average car, skinnier, has a tighter turning circle, and great visibility. That makes it perfect for the crowded streets of Whitstable.

They’re easy to repair, and at 45 years old it’s tax exempt and as economical as a modern van. It’s also appreciating in value, which makes it perfect for the expensive streets of Whitstable too.

I can’t understand why the average middle class family hasn’t got one.

For now though, it sits on Regent Street full of unmet potential. Life has since taken over. First he met his partner Annie. Then his whole professional life changed. 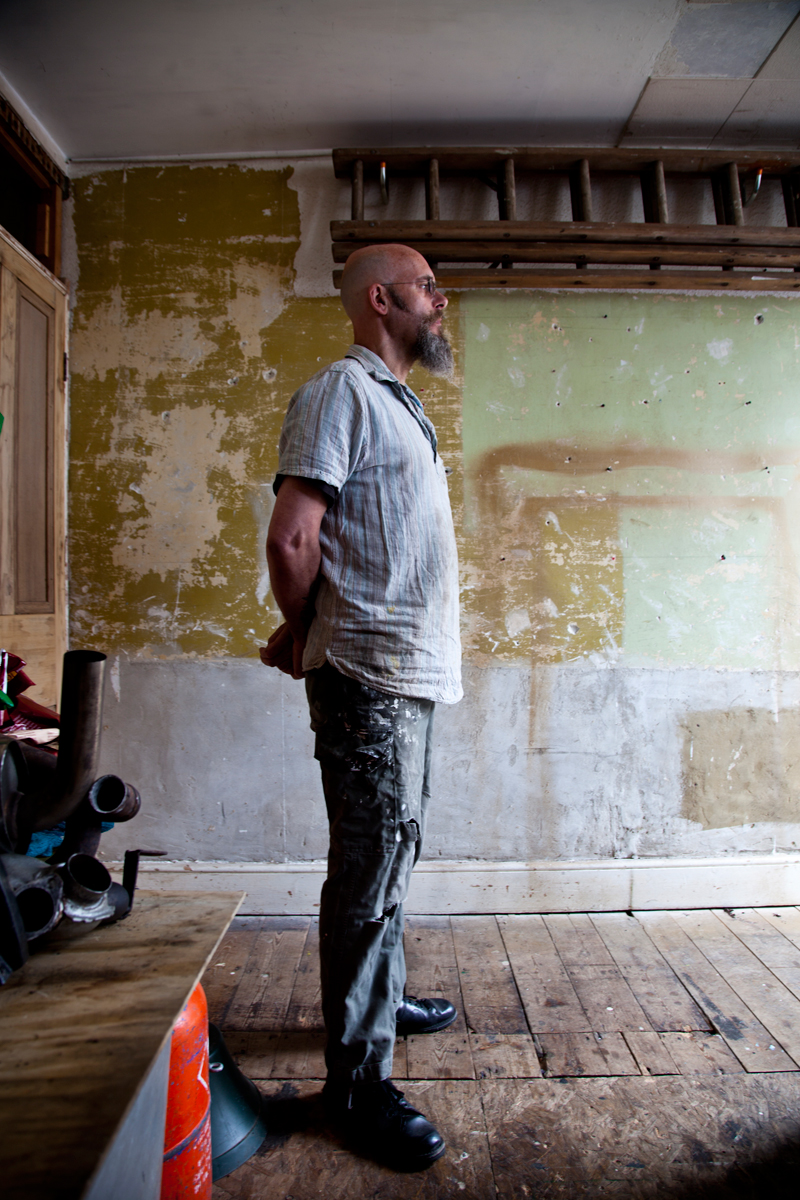 It was one of those freak injuries that brought working life to a halt.

Overnight he couldn’t move as he once did. Soon he couldn’t work either. A man who had prided himself on bringing complex machines to life, had suddenly become a spectator.

It’s a low level pain, but it’s relentless and tiring.

A vertebra in Allen’s spine moves more than it should, crushing his sciatic nerve leaving him with partial paralysis that can last for minutes, sometimes hours.

The steroid injections help, but the injury stops him from doing what he’d like to do most. It also meant a complete lifestyle change.

And so, having had enough of London, he and Annie cashed in their chips, and moved to Whitstable in search of an upside.

It’s not a Victorian promenade town; it’s a working town. The harbour has boats bobbing about in there, and it kind of grew on us.

Like most people who move here, they soon embraced Whitstable life.

We like to be a part of Whitstable, we like to keep its integrity, we like the independent shops, we want to keep the fishermen going. Not for nostalgia, but that’s what makes this place interesting.

It’s also what makes it the perfect place for a creaky, frustrated engineer to find something different. Something like picking up that guitar in the corner of the kitchen.

“ I sit around drinking tea all day because I can’t do anything. I thought I just want to learn enough to do the odd party piece. . .]

This is Whitstable after all, a town full of musicians. Soon one of them came calling.

After about a year a hardened bassist said come and have a jam with me. So I started playing with this guy. Bugger me, after two years of playing, I started writing music with him. I’m an engineer, I’m not a musician, I don’t write music!

Before long they were supporting a local band. An unfamiliar experience for someone more used to drilling holes in things.

None of which comes naturally to Allen (he berates himself for not being able to sing and play at the same time). But it gave him renewed purpose.

Other gigs followed. Then came the most recent one, which marked a turning point, performing ten tunes, written by the band, including Allen. Until now he’d not really caught the buzz other musicians had talked about. Now things were different.

I must admit at times I quite enjoyed it. Which is hope for the future really.

But after five years, multiple performances, credit from friends and musicians, there’s still something stopping Allen from thinking as creaky musician, rather than a creaky engineer.

In the middle of a town known for it’s artistic talent, there’s an engineer trying to operate in a world where rules aren’t as rigid as the world of metal and motors.

But this is Whitstable. Where else can you reinvent yourself, and then be accepted for it?

It’s a point not lost on Allen.

He might flinch at that word, but it’s what he is.

Give me a machine for long enough and I’ll make it talk. It can do it quicker and safer. Cleaner. Better.

At the end of the day the guitar, is a machine. And I find it tantalizing that if I did continue to play and practice, I may actually end up making it talk.

Meanwhile, outside, the fire engine will continue to make people smile. The prospects of its renovation may have faded — it’ll never shine in the polished red that it once did — but the romance of it is enough.

For now though, his captive audience is in Whitstable, among the friends he’s made here, and the music that got him moving again.

I’m not going to make any money out of this, and our tunes aren’t going to be played outside Whitstable. But what good fun, drinking beer and playing homespun music to our mates. It’s lovely.

I’ve got Whitstable to thank for that.